At AardvarkCompare we love to travel, and sharing travel hacks and tips is just a part of what we like to write about.

In this, the second part of our two-part post, we continue to share with you an Aardvark European Road Trip that one of our Aardvark team recently enjoyed, traveling from London England to the island of Menorca in the Mediterranean Sea. 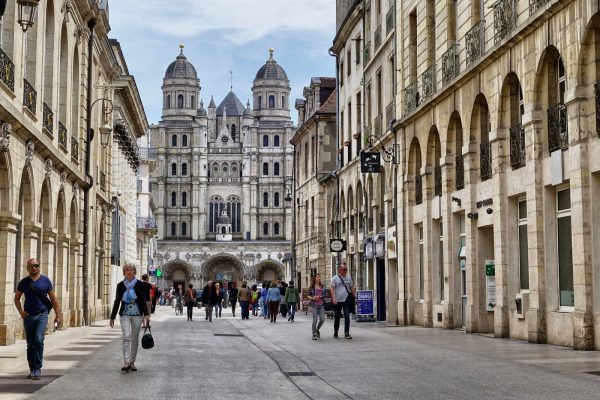 When we left you last, our intrepid Aardvark explorers had traveled from London, England, to Dijon, France, and spent the night in that beautiful French city which is well famed for its mustard, but perhaps lesser known for its stunning architecture and beautiful Gothic buildings.

Day two of our Aardvark adventurers' trip took them from Dijon to Perpignan in the south of France. A distance of 641 kilometers, which is a similar distance to traveling from Miami to Lake City, Florida.

Perpignan is a southern French city near the Mediterranean coast and the border with Spain. It was the capital of the Kingdom of Majorca during the 13th century, and a significant Catalan influence is evident in its medieval core.

Our explorers again opted to be spontaneous with their accommodation booking, and using a hotel and apartment booking app, found a simply stunning suite of apartment rooms in the center of one of Perpignan’s squares. Two recently refurbished double apartments cost just 160 euros – about $180.00.

Here’s one of the main squares in Perpignan, and this is the apartment block. The location was perfect as the main square has a secure car park beneath it which cost 20 euros for 24 hours – around $22.00.

After a good night's sleep, and breakfast in one of the cafés around the square, our Aardvark explorers set off on the penultimate leg of their trip, with a short 120-mile trip across the French border into Spain, and on to Barcelona, where they were to take a car ferry for an 11-hour trip across the Mediterranean sea to Menorca.

Arriving in Barcelona at midday, our explorers had most of the day to walk through the city of Barcelona, including a stroll up the La Rambla, which is the tree-lined street in this picture. La Rambla is in central Barcelona and is popular with tourists and locals alike. La Rambla is a pedestrian tree-lined mall which stretches for over 1.2 kilometers.

After a delightful day in Barcelona, our Aardvark explorers returned to the port of Barcelona ready to board the Trasmediterránea car ferry, which travels daily between Spain and both the Canary Islands and the Balearic Islands.

The Trasmediterránea is a reasonably well equipped car ferry with over a hundred cabins. However if you’ve been on a cruise holiday before, you may be more familiar with a cabin which looks like this.  The cabins on the car ferry are not quite as opulent as on a cruise liner.  They are somewhat more compact in size, but they are clean and tidy, and will allow you to rest ready for the final leg of your European Road Trip.

When our explorers woke, they were sailing into the port of Mahón. Mahón, or Maó as the locals call it, is the capital of the Spanish island of Menorca. It’s known for its British-style Georgian houses and sheltered harbor, and is considered by many, including Wikipedia, to be the origin of a certain condiment that many of us couldn’t do without.

So there we have it. Over 1,100 miles, traveling for three days across England, France and Spain, by car, tunnel and ferry – similar in distance to a trip from Tampa, Florida to Dallas, Texas.

Our Aardvark European Road Trip ends with our explorers settling into their villa in the stunning resort of Cala Galdana, with its crystal-clear waters, golden sands and idyllic horseshoe bay.

And remember, if you’re heading off for a European adventure of your own, or spending your holidays in the US, please remember to pack travel insurance, as you never know when you might need it. And at AardvarkCompare you can get an anonymous quote in seconds, and compare dozens of the top travel plans from many of the largest US travel insurers, saving you time and money finding the right travel plan for your needs.