Learn more about Germany Travel Health Insurance with an overview from the CDC and the US State Department. Here we cover Vaccines, Medicines and Insurance.

At AardvarkCompare we suggest that all travelers pack travel insurance whenever they travel away from home. Whether you are heading off on a business trip or your family holiday, make sure you have sufficient travel insurance in place.
The following advice should help you make the most of your trip to Germany.

Remember, if you do not have Travel Medical cover that will support you overseas, we recommend at least $100k of Travel Medical coverage. We like to see at least $100k of Medical Evacuation as well.
These levels of cover would make us comfortable on a foreign trip – we would not feel as though we had adequate protection without these key benefits.

US Citizens do not need a Schengen Visa to visit Germany. 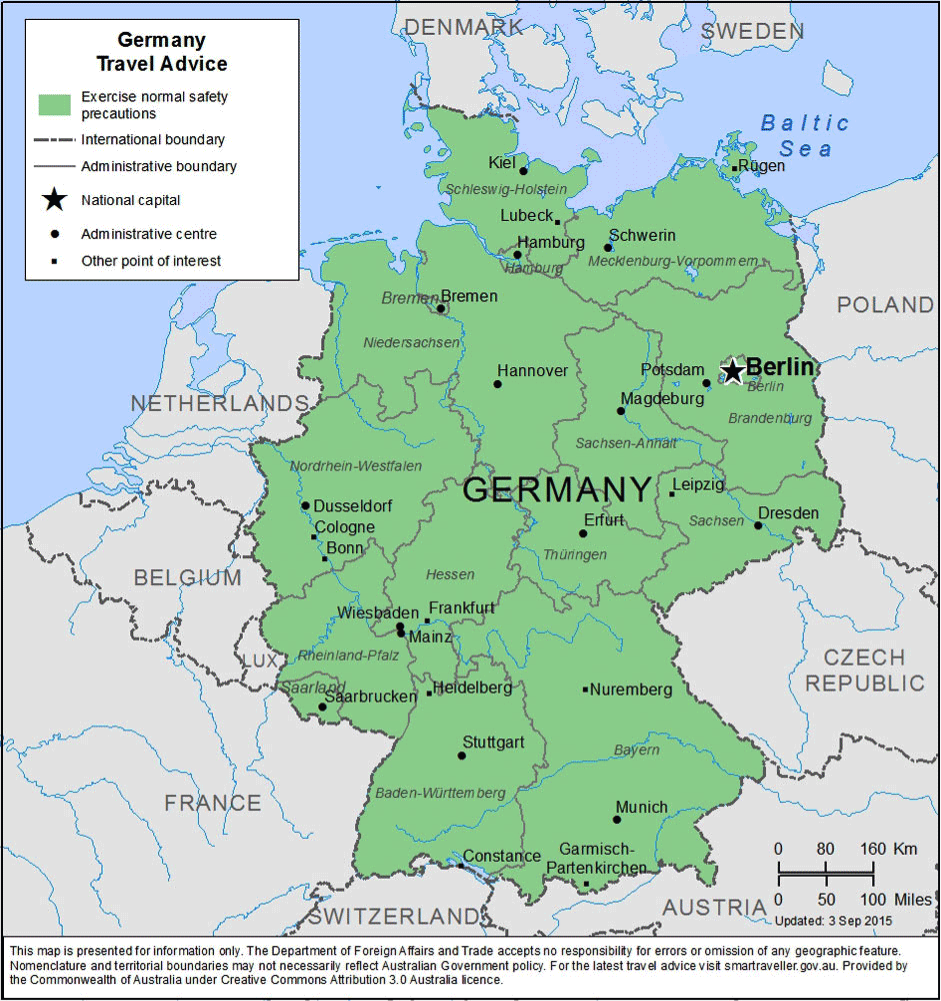 Check the vaccines and medicines list and visit your doctor (ideally, 4-6 weeks) before your trip to get vaccines or medicines you may need.

Make sure you are up-to-date on routine vaccines before every trip. These vaccines include measles-mumps-rubella (MMR) vaccine, diphtheria-tetanus-pertussis vaccine, varicella (chickenpox) vaccine, polio vaccine, and your yearly flu shot.

Hepatitis A outbreaks occur throughout the world and sometimes in countries with a low risk for hepatitis A (including the US). You can get hepatitis A through contaminated food or water in Germany, so talk to your doctor to see if the hepatitis A vaccine is right for you.

Rabies is present in bats in Germany. However, it is not a major risk to most travelers. CDC recommends rabies vaccine for only these groups:

Learn actions you can take to stay healthy and safe on your trip. Vaccines cannot protect you from many diseases in Germany, so your behaviors are important.

Food and water standards in Germany are similar to those in the United States. Most travelers do not need to take special food or water precautions beyond what they normally do at home. However, travelers visiting rural or remote areas that are served by unregulated water sources such as private wells should take special precautions to ensure the safety of their drinking water.

Although Germany is an industrialized country, bug bites here can still spread diseases. Just as you would in the United States, try to avoid bug bites while spending time outside or in wooded areas.

What can I do to prevent bug bites?

What type of insect repellent should I use?

What should I do if I am bitten by bugs?

What can I do to avoid bed bugs?

Although bed bugs do not carry disease, they are an annoyance. See our information page about avoiding bug bites for some easy tips to avoid them. For more information on bed bugs, see Bed Bugs.

If your travel plans in Germany include outdoor activities, take these steps to stay safe and healthy during your trip:

Keep away from animals

Most animals avoid people, but they may attack if they feel threatened, are protecting their young or territory, or if they are injured or ill. Animal bites and scratches can lead to serious diseases such as rabies.

All animals can pose a threat, but be extra careful around dogs, bats, monkeys, sea animals such as jellyfish, and snakes. If you are bitten or scratched by an animal, immediately:

Reduce your exposure to germs

Follow these tips to avoid getting sick or spreading illness to others while traveling:

Diseases can be spread through body fluids, such as saliva, blood, vomit, and semen.

Know how to get medical care while traveling

Plan for how you will get health care during your trip, should the need arise:

Many foreign hospitals and clinics are accredited by the Joint Commission International. A list of accredited facilities is available at their website (www.jointcommissioninternational.org).

Motor vehicle crashes are the #1 killer of healthy US citizens in foreign countries.

Be smart when you are traveling on foot.

Think about the driver.

Road Safety Overseas (Information from the US Department of State): Includes tips on driving in other countries, International Driving Permits, auto insurance, and other resources.

The Association for International Road Travel has country-specific Road Travel Reports available for most countries for a minimal fee.

Use the same common sense traveling overseas that you would at home, and always stay alert and aware of your surroundings.

While at your destination(s)

Use the Healthy Travel Packing List for Germany for a list of health-related items to consider packing for your trip. Talk to your doctor about which items are most important for you.

Why does CDC recommend packing these health-related items?

It’s best to be prepared to prevent and treat common illnesses and injuries. Some supplies and medicines may be difficult to find at your destination, may have different names, or may have different ingredients than what you normally use.

There are no notices currently in effect for Germany.

If you are not feeling well after your trip, you may need to see a doctor. If you need help finding a travel medicine specialist, see Find a Clinic. Be sure to tell your doctor about your travel, including where you went and what you did on your trip. Also tell your doctor if you were bitten or scratched by an animal while traveling.

For more information on what to do if you are sick after your trip, see Getting Sick after Travel.

Germany is one of the United States’ closest and strongest allies in Europe. U.S. relations with Germany are based on our close and vital relationship, as friends, trading partners, and allies sharing common institutions. Our political, economic, and security relationships, critical to shared prosperity and continued stability, are based on extensive people-to-people ties and close coordination at the most senior levels. Most recently, the United States and Germany have been working closely together to counter Russian aggression in Ukraine, negotiate a political solution to the crisis in Syria, and to curb the Iranian nuclear program.

In the political sphere, Germany stands at the center of European affairs and plays a key leadership role as a member of the G-7, G-20, the North Atlantic Treaty Organization (NATO) and the Organization on Security and Cooperation in Europe (OSCE). The United States and Germany work side by side to maintain peace and freedom and Germany plays an important role in NATO’s core mission of collective defense. In 2016, Germany held the Chairmanship of the OSCE where they helped continue the OSCE’s important work preventing conflict, promoting democracy, human rights and the rule of law, and encouraging open and transparent economies. The United States recognizes that the security and prosperity of the United States and Germany significantly depend on each other.

As allies in NATO, the United States and Germany work side by side to maintain peace and freedom. Germany plays an important role in NATO’s core mission of collective defense, serving as a framework nation for NATO’s Enhanced Forward Presence. U.S. and German troops work together effectively in NATO and UN operations worldwide due in part to the joint training and capacity-building performed at U.S. military installations in Germany. The two countries have extended their diplomatic cooperation into military cooperation by maintaining peacekeeping efforts in the Balkans and Africa, and working together to encourage the evolution of open and democratic states throughout central and Eastern Europe. Germany was an integral part of the UN-mandated International Security Assistance Force (ISAF) in Afghanistan and is a Framework Nation in the NATO-led Resolute Support Mission. German and U.S. maritime forces also are deployed to combat piracy off the Horn of Africa. Following the September 11, 2001, terrorist attacks in the United States, Germany has been a reliable U.S. ally in efforts against terrorism and combating foreign fighters and is a key member of the counter-ISIL coalition.

The United States provides no development assistance to Germany.

As two of the world’s leading trading nations, the United States and Germany share a commitment to an open and expanding world economy. Our deep economic ties are based on dynamic and growing trade and investment. Germany is a member of the European Union and is the largest European economy.

The U.S. and German trade relationship is driven by massive mutual investment. In 2015, German direct investment in the United States was worth $255 billion, while U.S. direct investment in Germany was worth $108 billion. German investments in the United States focus largely on manufacturing and wholesale, as well as finance and insurance. Altogether, U.S. affiliates of German firms employ over 670,000 American workers. Together, our companies represent over one million jobs on both sides of the Atlantic.

The U.S.-German Treaty of Friendship, Commerce and Navigation affords U.S. investors national treatment and provides for the free movement of capital between the United States and Germany. Taxation of U.S. firms within Germany is governed by a protocol on the avoidance of double taxation. 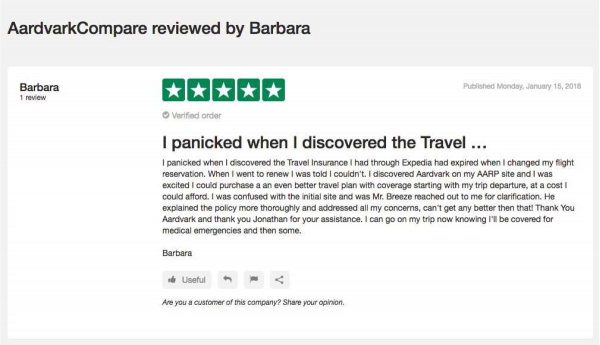 I Panicked When I Discovered
I panicked when I discovered the Travel Insurance I had through Expedia had expired when I changed my flight reservation.
When I went to renew I was told I couldn’t.
I discovered Aardvark on my AARP site and I was excited I could purchase a an even better travel plan with coverage starting with my trip departure, at a cost I could afford.
I was confused with the initial site and was Mr. Breeze reached out to me for clarification.
He explained the policy more thoroughly and addressed all my concerns, can’t get any better then that!
Thank You Aardvark and thank you Jonathan for your assistance.
I can go on my trip now knowing I’ll be covered for medical emergencies, and then some.
Barbara

Good Choices, Well Explained
I liked the way insurance was explained. I had read an article your company had written explaining Expedia trip coverage versus other choices.
I used this advice to make the best choice for me and my traveling companions. That choice was to take a policy that provided much better medical and evacuation primary care.
Your site allowed comparisons, and I think I got the best value for my money. I don’t like constant follow up emails. You could back off a bit!!
Louise